Home » Blog » Basketball 101 » How To Play Defense In Basketball

In the early stages of basketball training, a lot of attention is spent on shooting techniques as well as passing, scoring, physical strength, and fitness. But, like most sports, being able to play several different positions gives you an advantage. Basketball is a very fast-paced sport and defensive playing requires focus, strength, and sharp thinking. You could have a team full of top-notch offensive players and a great shooter or two but if you are lacking defensive skills, you won’t get very far in games. In this post, we outlined our top tips for playing defense so that you can get the upper hand.

Because everything moves so fast in basketball, you need to get ready. The ball could come your way at any moment and, if it ends up in your opponent’s hands, you need to be ready for a quick direction change to retrieve the ball or at the very least distract them from making their next pass. When watching basketball, you probably notice that every player seem to stand a certain way when they are playing defense. The defensive position looks something like this:

Their stance is slightly wider than the width of their shoulders. 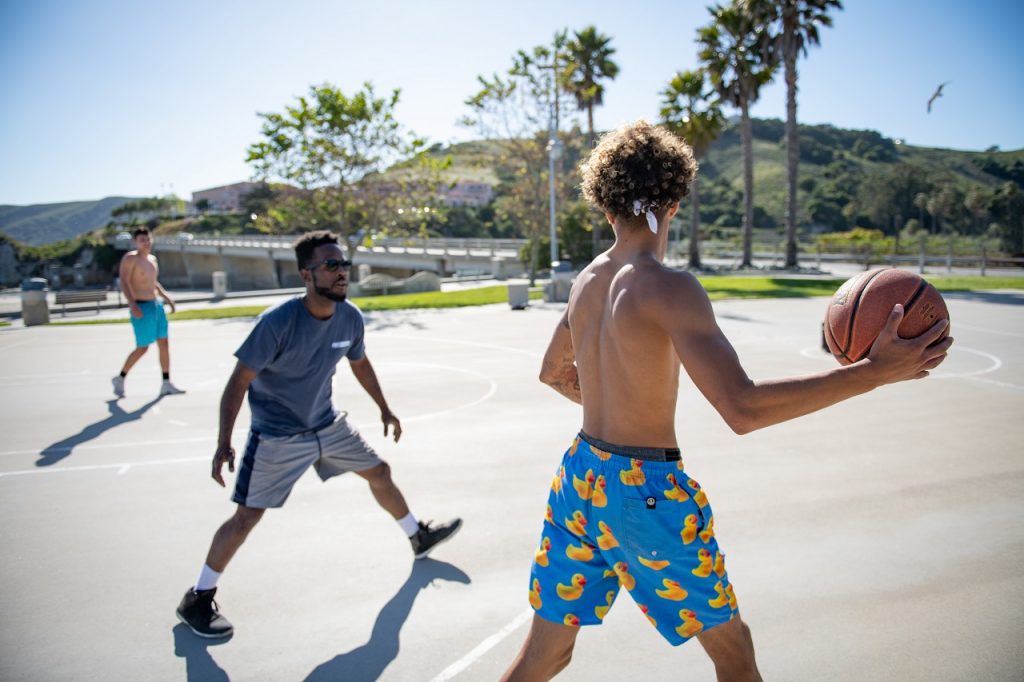 Their weight is on the balls of their feet with their knees bent. This makes it easier to change direction rapidly while maintaining their balance. Because the knees are already bent, they can jump in the air instantly if they need to.

A defender’s back should be straight, but not to the point that they are straining to hold a defensive position. Just straighter than it would be if they were relaxed.

Most of the time, a basketball player in defense has their hands raised but relaxed. This is so they are ready to intercept the ball or if they need to jump to try and prevent a shot or pass. 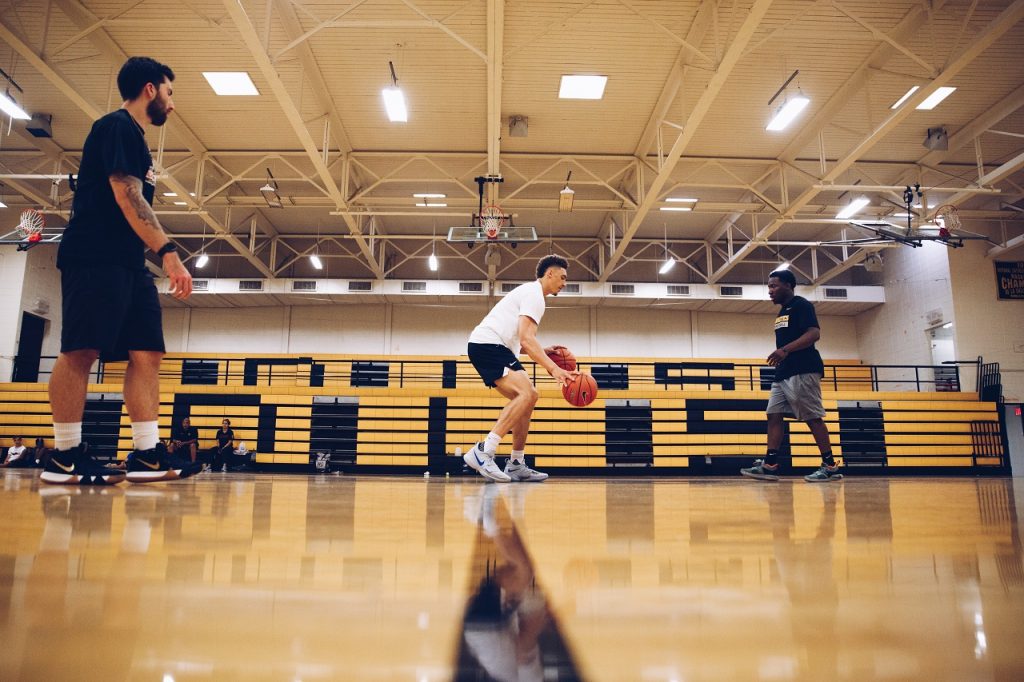 This is the basic stance of a basketball player playing defense. Now, coaches may have their own preference as to what stance they want players to use but it’s not usually too different than the description above.

Playing defense is not easy. It’s a matter of prediction and being as ready as you can be in case the game moves in a different direction. Here are a few tips for defending the ball:

Try not to get caught up in the moment. As soon as a shot has been made by your team, its time to get ready.

Don’t give it to them easily. No opposition player should be left with the ball with no one marking them. If this does happen, run over and put on the pressure. That way, they will either try and move or make a pass. 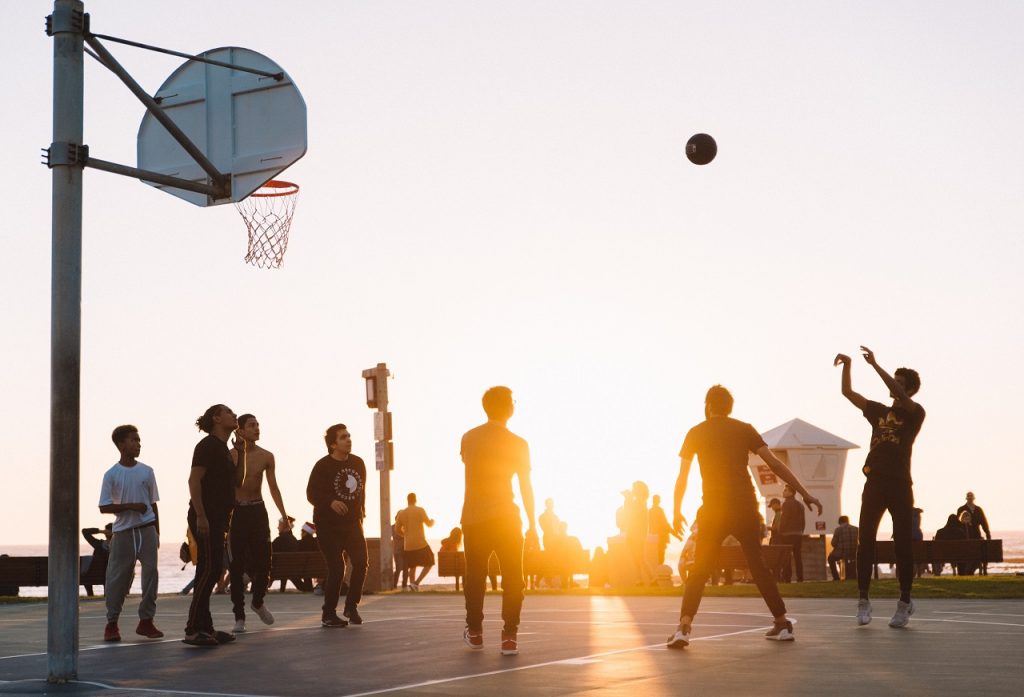 Take note of where the player you are marking is located. If they are towards the side of the court, angle your body, making them move closer to the sideline.

The whole time that you are defending the ball you should remain in a low position. It makes it easier for you to switch positions, change directions, or jump. 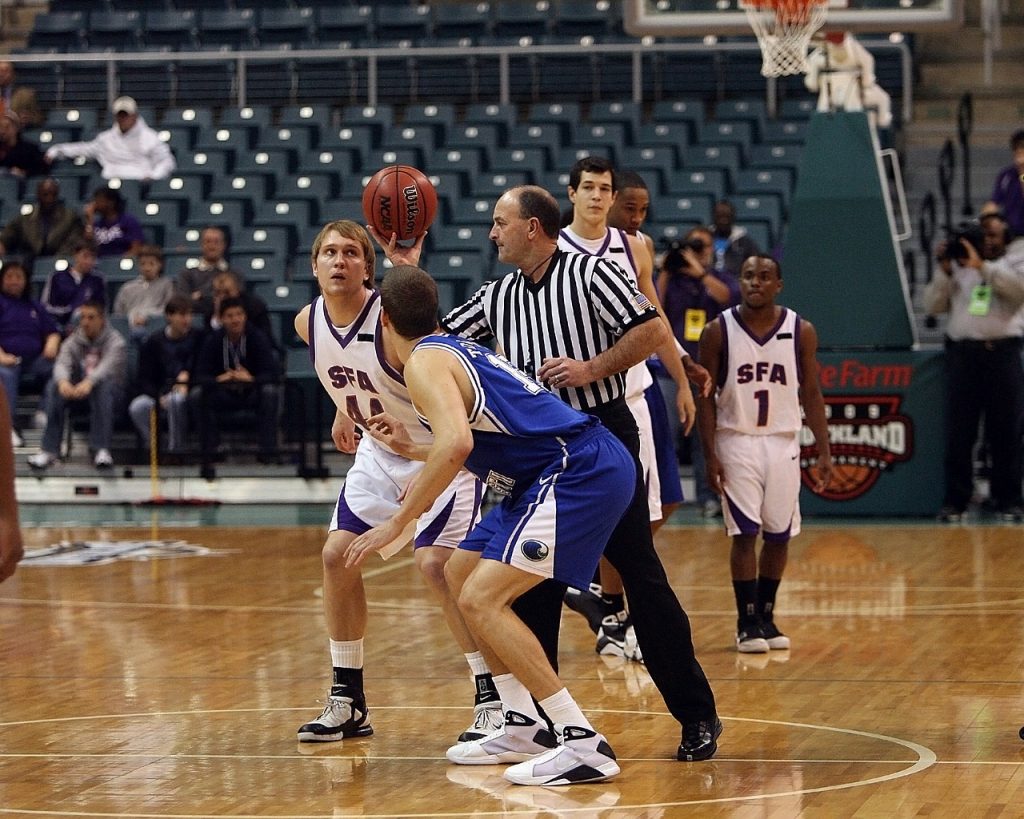 It might sound crazy but having a team that communicates on the court gives your defense the upper hand. You can only focus on your area and won’t always be able to see the rest of the court. That means you won’t necessarily know when other players are approaching you. Communication on the court can take a while to master but, when you have it, it makes all the difference.

One of the harder points of defense is defending the dribble. It can be way too tempting to just reach for the ball but you need to remember that the other player is in control. Wait until they make a mistake or until they lose control. It’s good to try and force them to the nearest sideline. That way, they will be limited in space and will need to pass the ball. There is a greater chance of them making a mistake or losing control when they feel trapped. Flicking the ball away is possible only if the dribbler is trying to move past you or if they are bouncing the ball loosely. You mustn’t hit the handler’s hand because then you will be charged with a foul.

Defending a player on a corner three-point shot is one of the harder defense positions. You will likely need to move out quickly to block a passing lane but, if you stay out too long, you leave the other player open for the ball in a prime position. Always make sure to return as soon as possible. Off-ball defense means never standing still. The basketball is moving continuously and so should you be. Remain in your defensive stance but stick with the player that you are covering.

To improve your performance in a defensive position, there are a number of things that you can do aside from just practicing defense drills. Improving your strength helps in all areas of basketball, including defense. Squats can be done as part of your training to strengthen your stance and a range of ladder drill and jump rope workouts can improve your footwork. Planks and sit-ups are a simple and easy way to improve core strength which comes in very handy when playing in defense.

Defense is definitely not the easiest position to play and it requires a lot of focus. Each team that you play against has different strategies and studying their play won’t guarantee you a win. Things change and teams like to have the element of surprise. It really is a case of preparing for all scenarios.

Basketball Skills and Drills for Beginners