Even though the first official game of basketball was played over 100 years ago and there are over a dozen professional basketball leagues around the world (and many more amateurs ones), today, we define basketball court size under 3 main professionally recognized categories.

NBA is probably the most well-known league in the world. Because of its popularity, it is what most people know which means that most people base their knowledge of basketball according to how it is played in the NBA. The same applies to the knowledge of courts, size, and equipment. So, it seems right that we start with this one. At the NBA level, the basketball court is 94 feet long by 50 feet wide. However, this only takes into account the court itself, as in the area considered in play, and it doesn´t include the adjacent areas. For example, the entire parquet floor should be at least 110 feet long. That extra 6 foot of space is intended for members of the media. 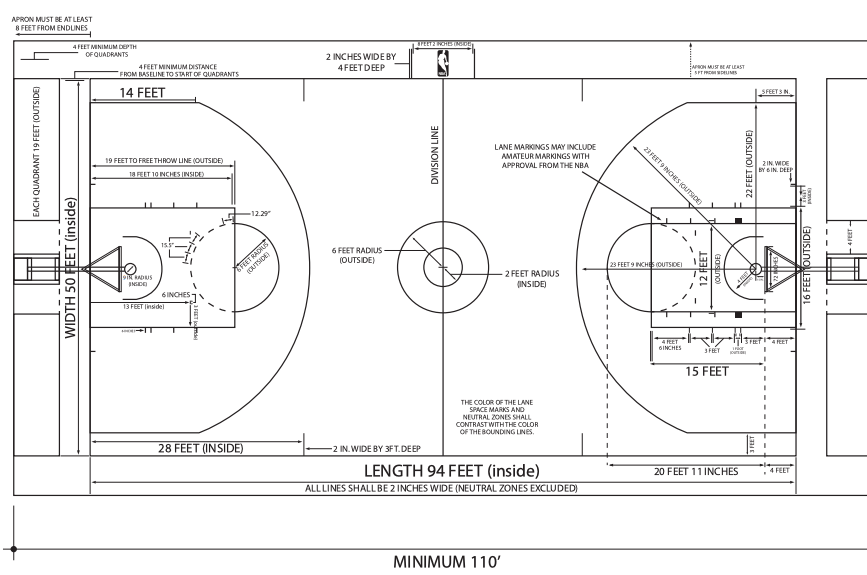 On A Professional Level

So, we have established that a professional basketball court is 94 feet long by 50 feet wide. Of course, this means that the shape of a court is rectangular. Alongside these measurements, there are a few more which don’t necessarily relate to the sizing of the basketball court itself but they are handy to know.

n regards to FIBA rules, the courts are 91.9 feet long and 49.2 feet wide, slightly smaller in comparison to the NBA. 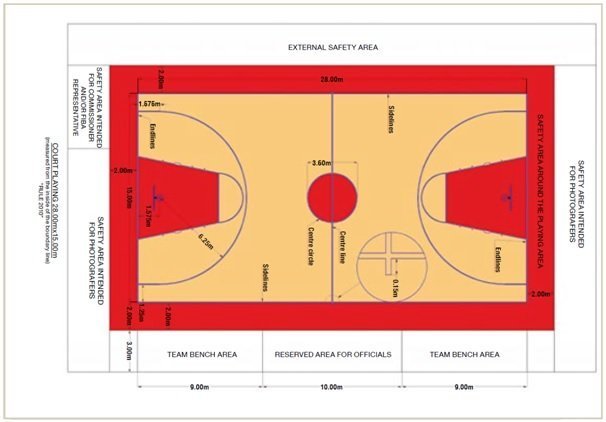 At a college level, a basketball court has the same dimensions as the NBA. So, there aren´t any differences here in terms of the court size. This is largely because of the age group of college students. By this point in their lives, they have developed into adults and their bodies can cope with playing on a full-sized court. It’s probably another reason why college basketball is taken so seriously and really a time when college players can compare themselves to the pros. 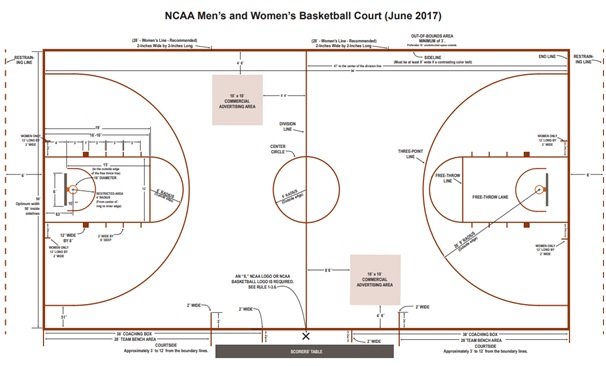 How About At A More Amateur Level?

When talking about an outdoor basketball court and what dimension it should be, it all depends on the available space. There isn´t any official ruling on this. People have the flexibility to use any dimensions that best suit their needs and preferences. But, with very few exceptions, amateur courts, and particularly outdoor courts, resemble a professional basketball court dimensions. Especially, when referring to parks or indoor gyms.

What About Indoor Courts?

In fact, we often see in-house basketball courts to be just half-courts without even a 3-point line. This is partly due to space and partly because a full-sized court just wouldn’t get the use that it deserves. Let’s face it, if you had a full-sized NBA style basketball court in your home, how often would you be able to get enough people together to play a legitimate game of basketball? Sure, at first you would have plenty of visitors but, eventually, things come up and you’re playing with just a few players. When this happens, it is unlikely that you will have enough energy to use the full length of the court.

Also, when playing indoors we don´t have to worry about setting aside any space for an audience or media members.

Some Interesting Facts And History Of The Basketball Court

You may have heard them before or it might be the first time; either way, here are some fun facts and history about the basketball court.

Little changes in terms of the size of a basketball court these days and if it does, then it will be a long process. There will be many, many hoops to jump through before any sizing changes, and we mean that quite literally.